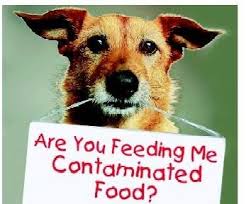 Almost a year ago we posted, Pet Health: Contaminated Pet Food – Deadly Ingredients! as the first entry in a new Pet Health category. That post explained in detail how a thousand dogs and some cats had died from treats made with ingredients sourced in China. While chicken, duck and sweet potato were the main suspect ingredients, to date, the FDA still has refused to ban importation of these ingredients or issue any recalls. In that post, we listed all of the suspect treat brands, as well as providing info on heavy metal contamination in dog treats and some general information of the use of genetically modified ingredients in pet food and the serious risk to pet health these ingredients posed.

Also to date, Chinese authorities have refused to allow the FDA to inspect ingredients sold for pet food. That post contained reports of various symptoms, suspected illnesses caused by the treats which had resulted in the deaths, etc. The situation has not improved despite public outcry. In fact, it appears to have gotten worse since then. Reports of illness and death among dogs, associated with Chinese-based treats, are now spreading across Europe as well. For symptom information and how to report problems, see our earlier post.

One of the suspected causes of death linked to treats was discussed in an article within that post, FDA investigation confirms that thousands of dogs died from contaminated China-based jerky treats, which stated,

“The FDA says it is still receiving complaints about dog treats, having processed more than 1,800 of them just since October when the previous warning was issued. Roughly 60 percent of the cases involve some sort of gastrointestinal distress or liver disease, while 30 percent involve kidney disease. The remaining 10 percent involve other conditions, including neurological and skin disorders. Shockingly, about 15 percent of the kidney and urinary cases have tested positive for Fanconi syndrome, which is when the kidney tubes release substances into the urine that, under normal circumstances, are supposed to be released into the blood. The result is that affected animals become unable to process certain nutrients, leading to chronic illness or even death.”

There has been a sudden rise in cases of Fanconi syndrome, except now the suspect treats also are made with completely US sourced ingredients (according to the packaging and website of the one case with the biggest outcry).  Because of it, nationally prominent veterinarians are advising against purchasing any jerky treats, and sticking to homemade. And now the claims have spread to dog food, not just treats. At issue is a popular brand sold in grocery, discount and pet stores across the nation. That’s real cause for concern. Hence, this update.

In addition, to provide some balance in this post we’re providing information for cat lovers on why cats seem to adore cardboard boxes and ways to make some nifty cat hideaways for virtually nothing but some time and imagination. New research has been done to solve the mystery of why cats are so attracted to cardboard (and boxes in particular) and you’ll find the answers below. And yes, they’re health related,

The treats at the center of the latest controversy

American made jerky treats may be tied to rare kidney disease in dogs  The most highly publicized case involves “Spot Farms all natural chicken strips” produced by Purdue Farms, the large producer of chicken for human food. The treats in question are listed as antibiotic-free, made from human grade chicken which were raised on family farms in Kentucky. The owner was aware of the issues surrounding treats originating in China and had carefully chosen only those made with US source ingredients. The article covers the packaging and website claims, and statements from a veterinary specialist.

“Dogs in the United States are turning up with the rare kidney disease, Fanconi syndrome, that had previously been associated with the China jerky treats.

Since 2007, more than 1,000 dogs have died from eating the China derivative treats, however no exact cause for the deaths have ever been found, and the treats continue to be sold on the shelves of pet stores and supermarkets. Within the last few years, public pressure has led stores to only sell the jerky treats made and produced from products in the United States.

In February, the FDA reported the number of illnesses and deaths had slowed between the months of May and September, leading experts to believe the problem may have resolved on its own, however the University of Pennsylvania has now reported recent cases of Fanconi disease in dogs that ate treats not made in China.

Media staff for Spot Farms, owned by Perdue Farms Inc., issued a statement they were saddened to hear about an ill dog, but since the launch of the product in 2013, they had never received any complaints of serious illnesses. The company is now following up on the information 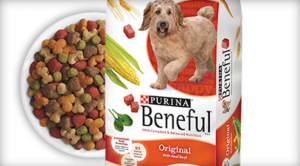 Dangerous dog food? Lawsuit claims Beneful sickened, killed pets  In our earlier post, we warned against purchasing pet food which contains ANY grain, not only because it isn’t an integral part of the diet for felines and canines and they’re digestive systems aren’t set up to handle grains, but also because the grains used in pet food today are genetically modified and are leading to numerous health problems. A lawsuit filed in February 2015 alleges there have been 3,000 online complaints in the last four years about dogs becoming ill after eating Purina’s Beneful. At issue are mycotoxins produced from fungus in grain, and propylene glycol, used in antifreeze. Just a few drops of antifreeze can kill pets, which often are attracted to it because of its sweet taste.

“A dog owner has filed a class-action lawsuit against the maker of a popular pet food brand alleging that thousands of dogs have been sickened or died from eating its dry dog foods. Pet owner Frank Lucido filed the suit on Feb. 5 in U.S. District Court in the Northern District of California against Nestle Purina PetCare Company. Lucido claims he fed his three dogs Beneful, and within a short period of time, two were sick and one was dead.

in a lawsuit settled in May, [2014] Purina and Waggin’ Train LLC agreed to create a $6.5 million fund to compensate pet owners who claimed their pets were sickened after eating pet jerky treats made in China. At the time, Food and Drug Administration officials said the pet treats were linked to more than 1,000 deaths in dogs and more than 4,800 complaints of animal illness. Three humans also got sick.” 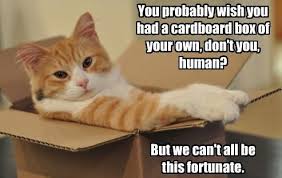 Cardboard Boxes And Cats: The Mystery Is Solved!  If you have a cat, you know how they’re drawn to any type of cardboard box, especially ones which seem so small that the sides are ready to split from the mass crammed inside. But why?

“[A]ccording to a new study from the University of Utrecht in the Netherlands…cats use boxes for stress relief. Researches took 19 cats that were new to shelters and gave 10 boxes, while the other 9 did not [receive any]. Over a 14 day period, the felines with boxes showed far less stress on the Kessker and Turner Cat-Stress-Score (CSS), and adjusted to the shelter environment far better than their box-less cohorts.

Cats are also awful at resolving conflict. If you have more than one cat, pay attention to where they go after a squabble, or to avoid one. Chances are, they are hitting an enclosed space, most likely a box. Hiding out in them helps them ignore whatever is stressing them out. That’s assuming your other cats don’t try to follow into the same box. . .

Outside of stress relief, boxes also provide something every cat needs: extra warmth. Cats prefer to stay between 86 and 97 degrees Fahrenheit, about 20 degrees higher than the average temperature of homes. Since cardboard is such a great insulator, curling up in boxes helps them maintain their comfort temperature. The same goes for cats curling up in a sink, or in a corner of the basement when they are too hot.” 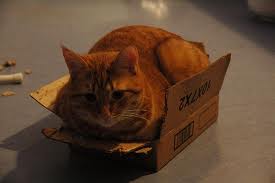 Any size box is the right size for a cat

Great google images of homemade cardboard cat structures and cats loving boxes  The pictures here should provide inspiration for some exciting designs of your own!

Cardboard Cat House/Doll House  This site, and the one following will give you complete instructions for creating the perfect cardboard cat castle for almost nothing (except your time).

How to Make Cat Jungle Gyms and Playgrounds  This is a basic primer for building a cardboard heaven for your favorite feline.

DIY cat furniture  This is a particular helpful site, in terms of which step follows the previous one.

Modern Cat Furniture – the KEK Cat House  If cutting up your own cardboard is too much for you, but you don’t like leaving boxes around the house either, there’s always the option to purchase pre-made cat furniture. It’s sure to delight since it’s made from cardboard, and because of that, the cost isn’t prohibitive either, at least from some sources, like this one in the UK. From others, pre-fab is over the top, in terms of cost.

10 Amazing Cat Structures  Want to be really amazed at what can be accomplished in terms of creating a paradise for cats? Check out this article (with extensive pictures). These aren’t cardboard though, so while they may be impressive, they may not appeal to cats or relieve stress in them like your own cardboard box creation can.

Rufus Tower  This is a delightful video of one man’s creation of a cardboard tower to distract his ailing cat. There are lots of videos on YouTube that cover creating cardboard structures. Just search for “cardboard cat furniture.”

God’s Word requires us to care for our pets and for those animals in our charge, and He will hold us accountable for how we treat them. They are a part of the creation that, along with us, is longing for redemption. The new earth will be filled with animals and Scripture seems to indicate that the pets we cherish will be reunited with us in heaven. That’s compelling evidence of how much they matter to God and are loved by Him. For that reason, along with the knowledge of how much they add to our lives through their loyal, loving and trusting natures, they should matter to us! It’s both our duty and our privilege to do the best we can for them because of the God-given dominion we hold over them.