Understanding and Bonding Between Pets and Their Owners, Part 1 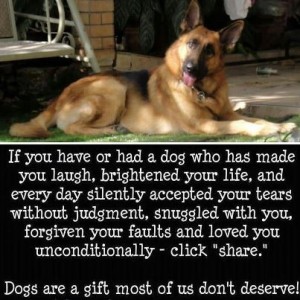 There are great differences in the behaviors of cats and dogs, with dogs being seen as loyal, loving and committed to their owners, no matter how they are treated. Cats, on the other hand, are seen as aloof and independent, even when their owners dote on them. Traditionally, both are seen by science as “dumb beasts,” without the mental or emotional faculties for anything much, and as such, acceptable for use in any type of research. But is that right?

Science is beginning to awaken to the understanding of pets as amazing creatures, knowing and understanding far more than ever believed possible. New research is opening the eyes of those who saw cats, dogs, horses and other animals as unintelligent, soulless creatures, and It is confirming what pet lovers have believed all along: that the animals we share our lives with have some amazing capabilities, far beyond anything we ever imagined.

Below are articles discussing the bonding of our pets with us, showing they understand a great deal about our needs, our feelings, and our conversations with them, and presenting studies that show those animals we’re closest to actually can read our thoughts. Are cats and dogs different? Yes, in general ways. But when it comes to the bonds they share with loving owners, they’re more alike than we ever knew. At least, that’s what science is beginning to understand and prove.

What’s even more amazing than all of this is that we’re beginning to understand that dogs are moral creatures, with a sense of justice and fair play, and that they expect their human owners to behave morally as well. All of that demonstrates why God found them such an important part of His creation, and why He gave them to us as best friends. This brings into focus the question of whether pets are so important that they’ll be with us in heaven. The new research being done actually bolsters the argument that they will, and because of a covenant relationship with their owners, pets will be resurrected as well. The bonding which allows them to know our thoughts also seems to guarantee them a place in eternity.

This is part 1 of a two part series and while most of the information this time focuses on dogs, in part 2 we’ll spend more time on cats and their relationships with their owners.

A dog’s life: study reveals people’s hormonal link with tail-waggers  There’s a very good video by the Canadian Broadcasting Company explaining this in more depth on the article page. Because it can’t be embedded here, you’ll have to watch it there, but it’s something worth viewing if you’re at all interested in this subject.

“[S]cientists say the bond between people and their pooches may be deeper than you might think.

Researchers in Japan said on Thursday oxytocin, a hormone that among other things helps reinforce bonds between parents and their babies, increases in humans and their dogs when they interact, particularly when looking into one another’s eyes.

Sometimes called the “love hormone,” oxytocin is made in a brain structure called the hypothalamus and secreted from the pituitary gland. It is involved in emotional bonding, maternal behavior, child birth, breast-feeding, sexual arousal and other functions.

In one experiment, dogs were put in a room with their owners. The researchers tracked their interaction and measured oxytocin levels through urine samples. People whose dogs had the most eye contact with them – a mutual gaze – registered the largest increases in oxytocin levels. The dogs also had an oxytocin spike correlating with that of their owner.

The researchers conducted a similar experiment with wolves, close relatives of dogs, and found that no such thing happened despite the fact that the wolves had been raised by the people.”

For related subjects, and to see other articles on animal emotions and bonding, scroll down within the posts: “Have You Been Eating Cancer?” and 7 Signs You May Have a Vitamin D Deficiency.

15 Amazing Things Your Dog Can Sense About You  This is an interesting list of things that dogs understand about the people in their lives, with either a lay explanation or discussion of scientific research done in that area. Unfortunately, each entry is on a separate page so it takes some time to go through the article, but the list includes traits such as knowing when you’re being unfair, when you’re grieving, when you’re sad, if you don’t like someone, any diseases you may have, and even when your back is turned (and why that matters). There also are entries on how dogs know if you’re a good, generous person.

It provides some useful information and gives us a better understanding of exactly how and why we relate so well to dogs, and why they truly are “man’s best friend.” Reading through this, it’s clear that they are empathetic, emotional and intelligent, some of the finest animals in God’s creation. Most scientists believe dogs have the intelligence level of toddlers and can understand about the same number of words, relating to their owners in much the same way as a child to a parent. But this makes clear that they have much more emotional ability, understanding and connection with us than previously was thought.

“Dogs expect reciprocity, they expect kindness, and they expect fairness. Dogs have a strong moral compass, which is what makes them such outstanding companions. They expect you to live a moral life and will react accordingly.

Your dog will understand when you are mourning a loved one and will most likely go through a grieving process of his own. He may become clingier or more attentive. Some dogs have been known to howl when experiencing bereavement. To help your dog deal with grief, start by maintaining his normal routine.

New science suggests that, contrary to what neurologists previously believed, the heart actually has a stronger electromagnetic field than the brain. It also sends messages to the brain, through neurotransmitters, that influence thoughts and behavior. When we describe someone as being “goodhearted,” it means that the person literally has a force field of good energy radiating from their heart. Dogs have been aware of this magnetic field for centuries and will naturally gravitate toward those who emit good energy.

Dogs will also know if you are a good person based on your body language and how you treat others. If your dealings with others are just and fair, your dog will pick up on that based on how people react to you. Just as the dogs above were drawn to the more generous individuals, dogs are also drawn to those they perceive as more fair or trustworthy. It isn’t entirely clear how dogs make these moral judgments, but it is clear that you need to be consistently fair, both to your dog and to those around you….”

VETERAN PASTOR OPENS UP ON WHAT THE BIBLE ACTUALLY SAYS ABOUT PETS  Excerpted from the new inspirational book, “Do Our Pets Go To Heaven?”

“In the same way that people will be in Heaven (or not) depending on their covenant relationship with God (which in the New Testament is defined as an ongoing relationship with God through Jesus Christ, our Mediator, whose atonement for our sins was made through the shedding of His blood at the cross—“this cup that is poured out for you is the new covenant in my blood” [Luke 22:20]), the question of whether pets go to Heaven may depend, some believe, on their “covenant” relationship with man! In other words, just as we are made a part of the family of God as a result of accepting the grace extended to us through Jesus Christ, pet animals may be brought back into a pre-Fall covenant by coming under and accepting human dominion as it was first intended. No longer “wild” and outside man’s control, they become part of a Christian family, and are saved as a result. In this way, some animals as “pets” may be in Heaven while most other animals will not, similar to how some humans will be in Heaven while others will not, all depending on restored covenant.”

Is your pet psychic? A Cambridge scientist believes we have only seen the beginning of animals’ telepathic powers

“[S]ome animals seem to sense when their owners have had accidents or have died in distant places — as documented on my database of more than 5,000 case histories involving psychic phenomena in animals.

This includes 177 cases of dogs apparently responding to the death or suffering of their absent masters or mistresses, mostly by howling, whining or whimpering, and 62 accounts of cats showing similar signs of distress. Conversely, in 32 instances people knew when their pet had died or was in dire need, even when they were many miles away at the time.

[A]s someone who has spent his entire adult life working as a biologist, holding senior academic posts both here and in the U.S., I am constantly surprised and frustrated by the refusal of my colleagues in the scientific world to take them seriously. Without acknowledging such phenomena, it’s difficult to see how we can fully understand the behaviour of not just cats and dogs, but wild animals such as wolves.

In telephone surveys in Britain and the U.S., I found that in about 50  per cent of dog-owning households and about 30  per cent of those with cats, the animals were said to anticipate the arrival of a member of the family. And it was not just dogs and cats that were involved. More than 20 other species showed similar behaviour, especially parrots and horses, but also a ferret, several bottle-fed lambs raised as pets, and pet geese.”

God’s Word requires us to care for our pets and for those animals in our charge, and He will hold us accountable for how we treat them. They are a part of the creation that, along with us, is longing for redemption. The new earth will be filled with animals and Scripture seems to indicate that the pets we cherish will be reunited with us in heaven.

That’s compelling evidence of how much they matter to God and are loved by Him. For that reason, along with the knowledge of how much they add to our lives through their loyal, loving and trusting natures, they should matter to us! It’s both our duty and our privilege to do the best we can for them because of the God-given dominion we hold over them.