Understanding and Bonding Between Pets and Their Owners, Part 2 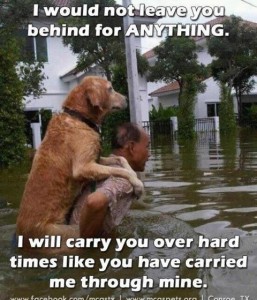 In our last post on Pet Health, we focused mainly on dogs: how much they understand about us, how closely they bond to us and why they’re considered our best friends. While it may appear at first glance that we’ve resumed our focus on dogs, if you’ll check the articles and videos below, you’ll find that the information applies to cats and other animals as well.

In Part 1 we also included information from a recent book about pets in heaven. We’re continuing in this post to list additional resources for those who have lost a pet or who have questions about whether their beloved pets have an afterlife. That subject is very important to us when we’ve bonded closely with an animal we love. All of us want to believe that we’ll see them again, and for Christians, there’s good reason to believe that we will.

Pets add a great deal to our lives, and it’s hard to imagine life without them. They comfort us, make us laugh, provide companionship, teach us compassion and so much more. What’s becoming apparent as research progresses is just how amazing they are, and how they love us as much as we do them. Below you’ll find some remarkable stories about animals who answer the phone, know what their owners are thinking and more.

There also are a couple of links for resources that you might need one day, for Yahoo groups where you’ll find people who care about animals and put in time to help others with missing or sick pets. You’ll find lots of compassion, prayer and expert advice in these groups, should you be in a position to need that. Finally, just for fun, there’s a section on one cat’s rising fame as an existentialist video philosopher.

The Unexplained Powers of Animals (video) This is an interesting and humorous clip from a 40 minute lecture by Rupert Sheldrake, speaking about the telepathic power of animals, and some of the research done for his landmark book, “Dogs That Know When Their Owners Are Coming Home.” His remarks on cats are especially funny.

The Unexplained Powers Of Animals

“For many years animal trainers, pet owners and naturalists have reported various kinds of perceptiveness in animals that suggest the existence of psychic powers. Surprisingly little research has been done on these phenomena. Biologists have been inhibited by the taboo against ‘the paranormal’, and psychical researchers and parapsychologists have with few exceptions confined their attention to human beings.

Some companion animals even seem able to tell when a particular person is on the telephone before the receiver has been picked up. For example, when the telephone rings in the household of a noted professor at the University of California at Berkeley, his wife knows when her husband is on the other end of the line because Whiskins, their silver tabby cat, rushes to the telephone and paws at the receiver. “Many times he succeeds in taking it off the hook and makes appreciative meows that are clearly audible to my husband at the other end”, she says. “If someone else telephones, Whiskins takes no notice.”

For several years, with the help of hundreds of animal trainers, shepherds, blind people with guide dogs, veterinarians and pet owners, I have investigated some of these unexplained powers of animals. There are three major categories of seemingly mysterious perceptiveness: telepathy, the sense of direction and premonition.” 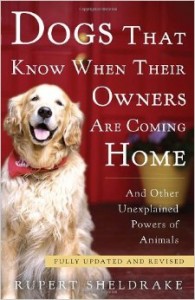 Dogs That Know When Their Owners Are Coming Home by Rupert Sheldrake  This book also covers animals other than dogs. In strictly controlled, scientific studies, it was found that certain animals did know, to the point that an owner could be many miles and hours away, and the moment they began even thinking about returning, their pets demonstrated clear behavior (such as running to the door, etc.) indicating that they knew their owners were on the way or merely had decided to return.  It is a fascinating book, one which demonstrates that you have a definite chance of communicating through thought with your pet, and which reinforces the amazing power of love. That bond of love which develops between us and those pets we cherish creates a literal connection which grows from that love.

Dogs That Know When Their Owners Are Coming Home. by Rupert Sheldrake  (Facebook site)  Rupert Sheldrake is a Cambridge University biologist who has written more than 80 scientific papers and ten books. 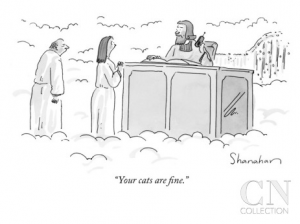 Prayers for Pets  “When you need us, we’re here”

Animals in Heaven (video)  This is an hour long video presentation by Jack and Rexella Van Impe which covers biblical texts, thoughts of great theologians through the ages, and much more. You’ll be convinced by the end of this video that there’s no doubt we’ll see them again.

Cats & Dogs. Pets in Heaven: Is It Biblical?  This short video is a compilation of Bible verses, set to piano music, about animals and the afterlife. No Rainbow Bridge here, just assurances that they too are waiting for redemption because the Bible speaks of them being in heaven and on the new earth.

Missing Cat Assistance  As a member of this group since 2004, (and moderator for a time) I can verify that members are supportive, creative and full of helpful tips for recovering a lost cat. There also are links for other cat-related services. If you need them, simply fill out a questionnaire about your missing cat and join. There are nearly 2,000 members and archives with letters on just about any topic you can think of, relating to lost cats.

Missing Cat Assistance offers resources [and] a network of support in locating and recovering lost cats. Membership is open to volunteers, shelter personnel, rescue volunteers, pet detectives, people who want to learn about lost cat behavior, lost pet services, conscientious pet-owners, and pet-owners who have lost a cat and are seeking help. Searching our archives you can find helpful tips, rescue stories, questions, photos [which] are all welcome. 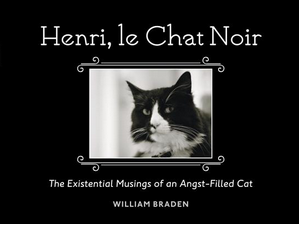 Could Henri be speaking for more of our cats than we realize? Is this where that aloof attitude originates?

Henri, afflicted by fame  If you’re wondering what your cat really is thinking, maybe you should step out of the box and listen to Henri, the existentialist philosopher who lives inside this cat’s body. The article states that “Paw de Deux” is his most popular video, but I have a different, personal favorite, embedded below.

“Over the last six years, [filmmaker Will] Braden and Henry have developed a special relationship. Braden makes YouTube videos in which Henry plays a French existentialist named Henri. The two-minute videos of the fluffy black cat with particularly long whiskers are Internet sensations, viewed more than 10 million times.

He has signed his first book deal. “Henri Le Chat Noir: The Existentialist Musings of an Angst-Filled Cat” will be published by an imprint of Random House next year.

No one can say for sure why cat videos attract such an enormous following, but Emily Huh, editor in chief of Cheezburger, a website of humor blogs, has a theory. “Dog owners have a dog park where they can show off their dogs, but cat people don’t have that,” she says. “The Internet is where people who love cats can go to say, ‘Look how cute my cat is.’ “

How to Decode Your Cat’s Behavior

“[D]espite their reputation for being aloof and independent, cats bond closely with their human owners and often engage in a serious of behaviors to communicate affection, anger, agitation and other emotions, scientific studies show, Scientific American reports.

Here are some common cat behaviors and what they mean:

Purr: This curious guttural sound that cats make has many meanings. It can signal contentment or distress, hunger, fear or even injury.

Meow: Cats rarely make this sound to one another, but use it to communicate with their human owners. Typically, cat owners can decode their own cat’s wide vocabulary of meow sounds in ways others can’t — in the same way mothers can understand a newborn’s unique vocalizations.

Ears: When a cat’s ears are pulled back, it generally signals fear or aggression. Ears forward: interest and curiosity.

Tail: Unlike a dog’s wagging tail, which indicates contentment, a cat will whip its tail back and forth when agitated or distressed. A tail straight up indicates fondness; a puffed out tail may indicate fear; and a tail tucked between the legs usually signals insecurity.

Rubbing behaviors: When a cat rubs its face on you or an object, it’s not necessarily a communication of affection. Cats have facial glands that issue secretions they use to mark territory.

Kneading: This instinctual behavior develops in kittens to stimulate production of its mother’s milk. In adult cats, kneading is thought to communicate affection.

Licking: Cats lick themselves, one another, and their human owners for grooming, but also to demonstrate affection.”

Henri Le Chat Noir  (Henri, the Black Cat) If you also find Henri clever and appealing, at present his YouTube channel has 18 videos. Here’s another great one, exemplifying the point of the article, above, that cats have a way of getting their thoughts across to the humans in their lives.

God’s Word requires us to care for our pets and for those animals in our charge, and He will hold us accountable for how we treat them. They are a part of the creation that, along with us, is longing for redemption. The new earth will be filled with animals and Scripture seems to indicate that the pets we cherish will be reunited with us in heaven. That’s compelling evidence of how much they matter to God and are loved by Him. For that reason, along with the knowledge of how much they add to our lives through their loyal, loving and trusting natures, they should matter to us! It’s both our duty and our privilege to do the best we can for them because of the God-given dominion we hold over them.